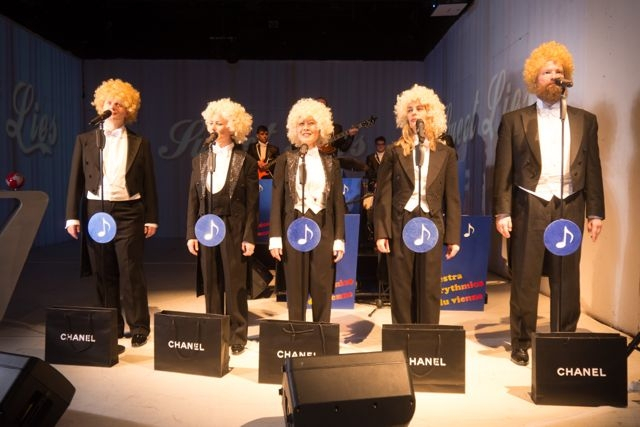 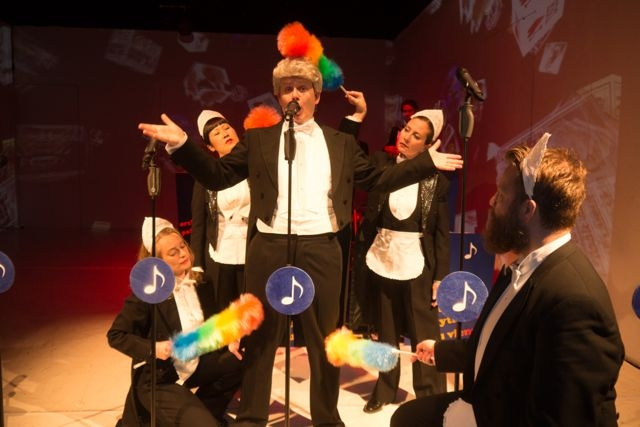 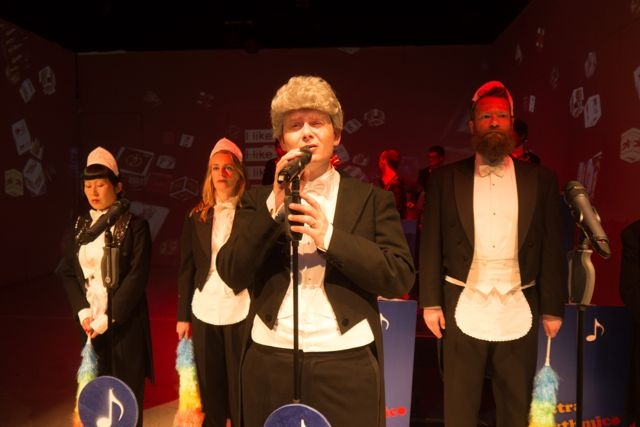 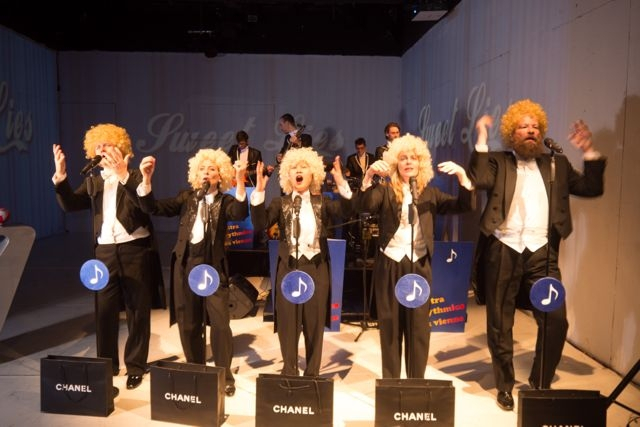 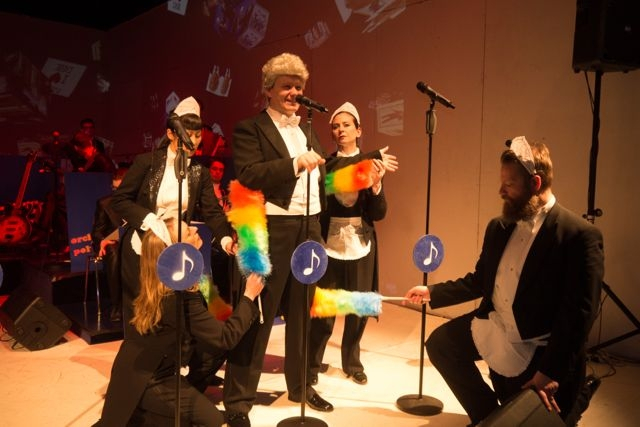 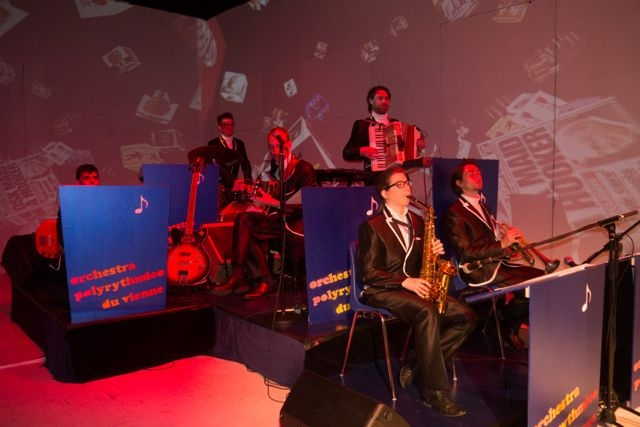 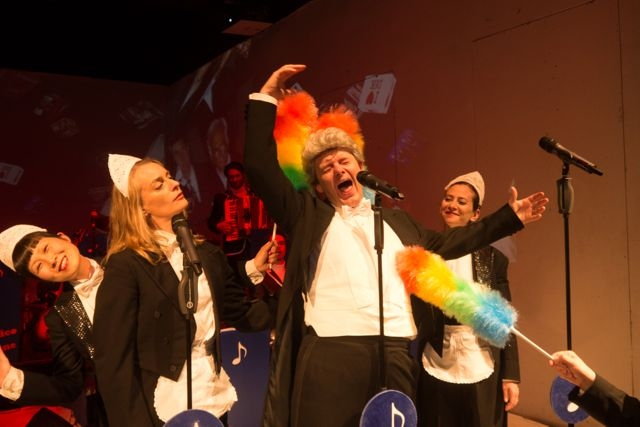 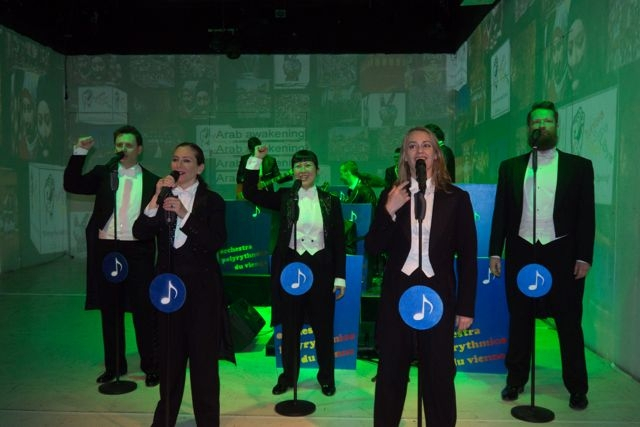 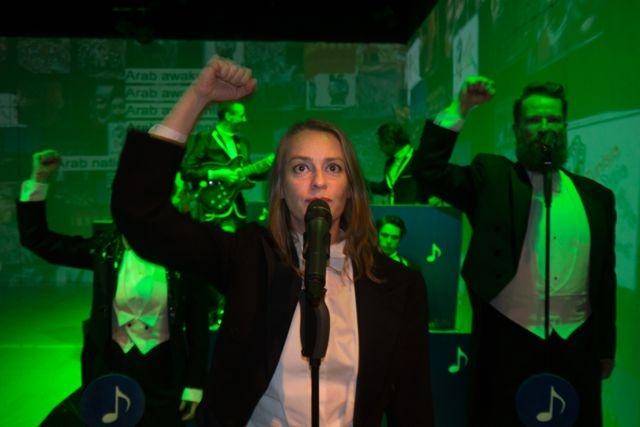 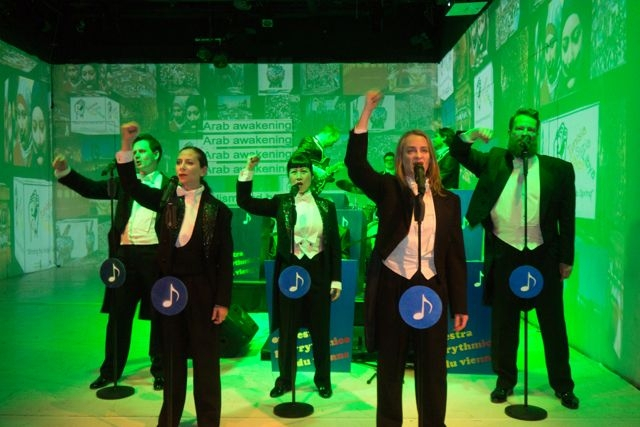 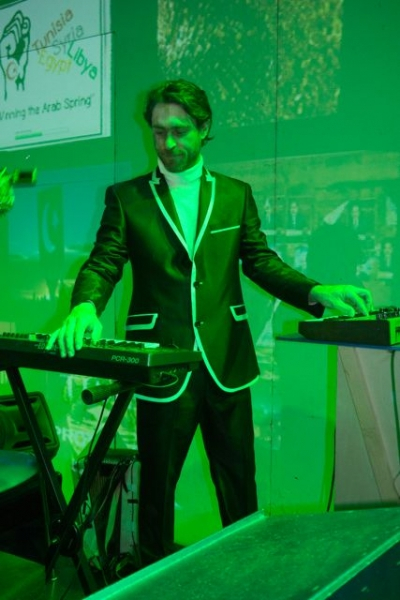 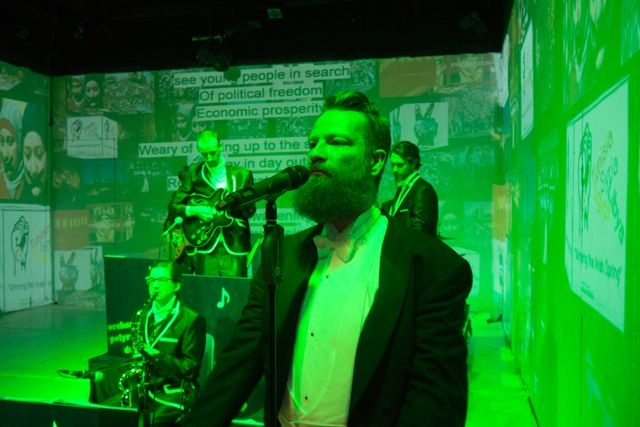 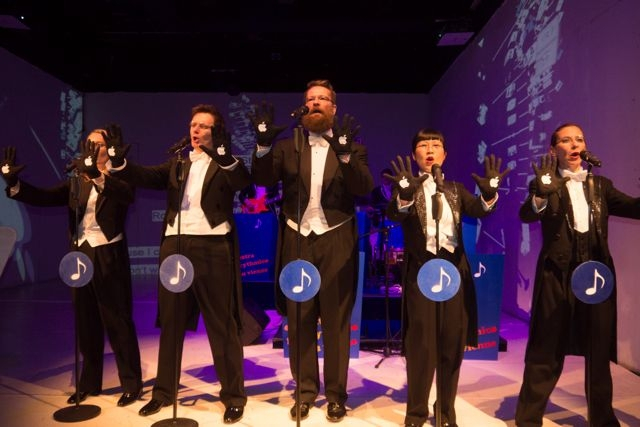 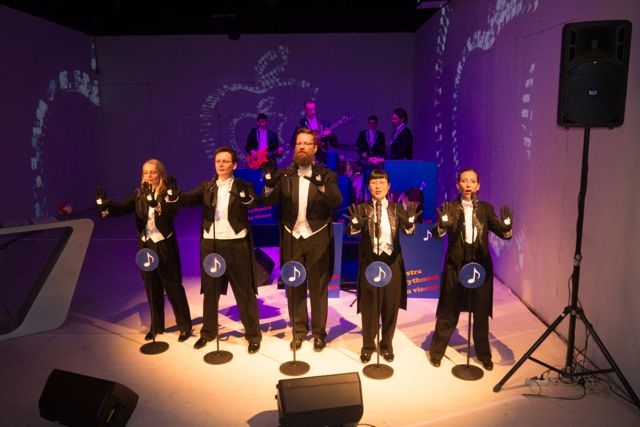 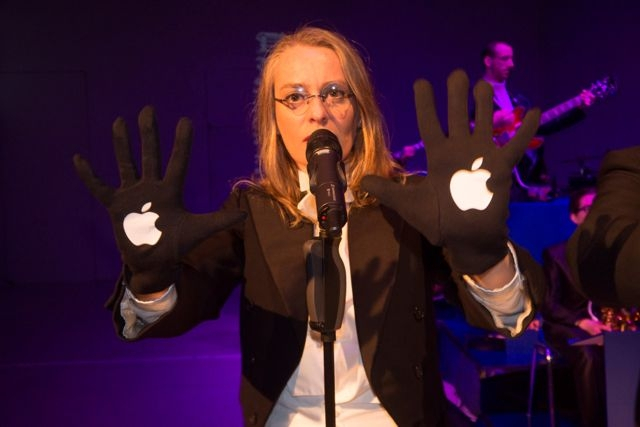 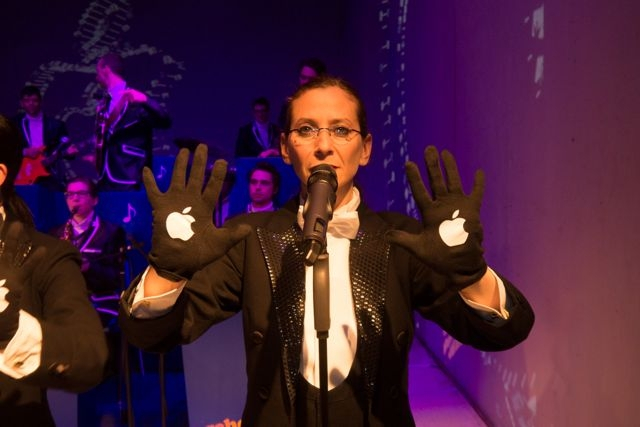 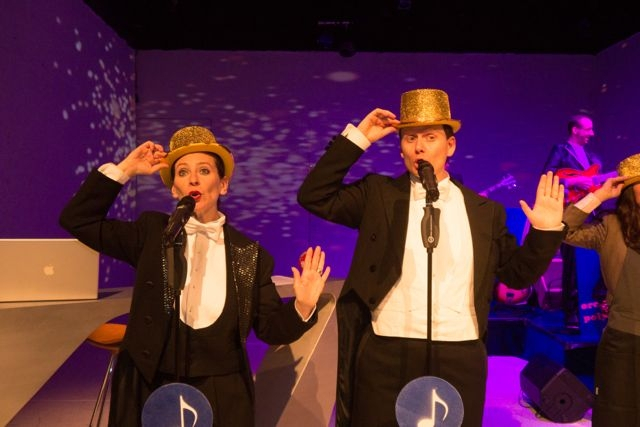 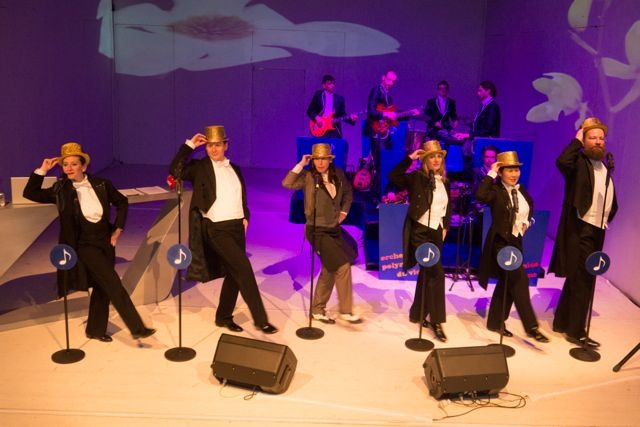 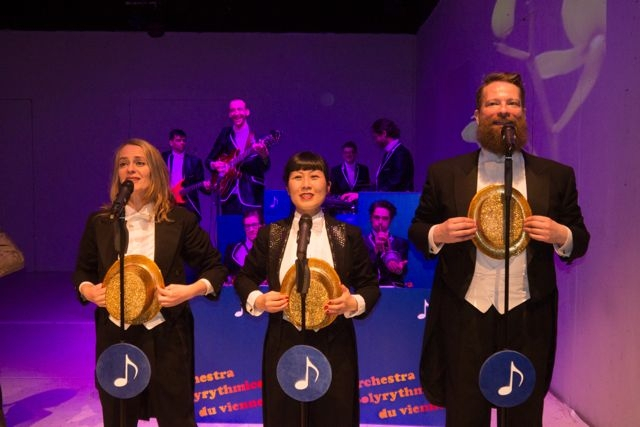 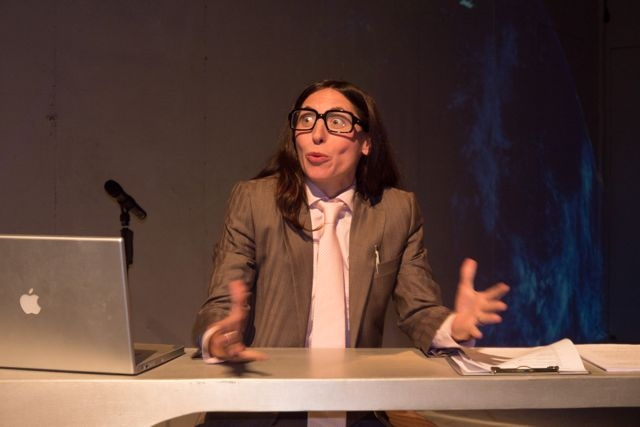 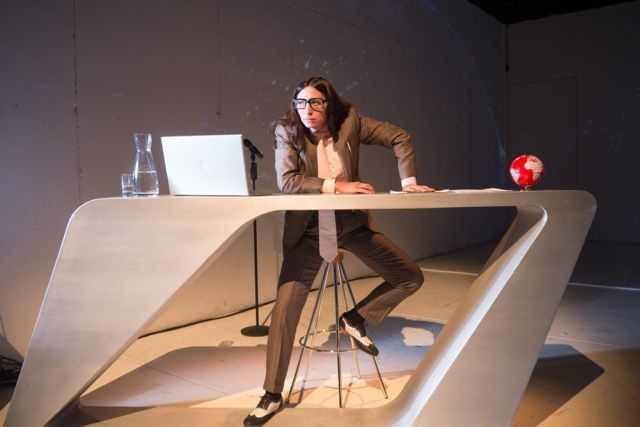 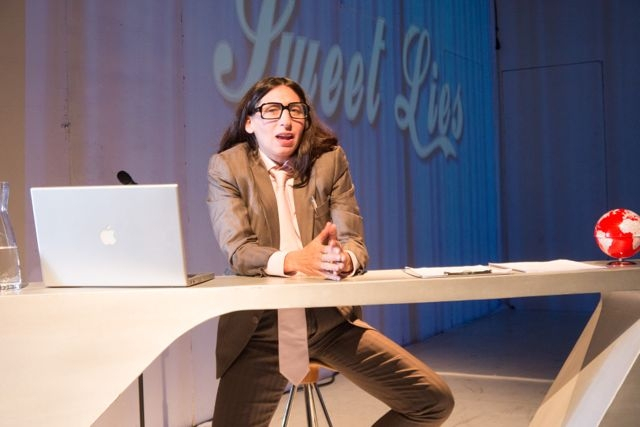 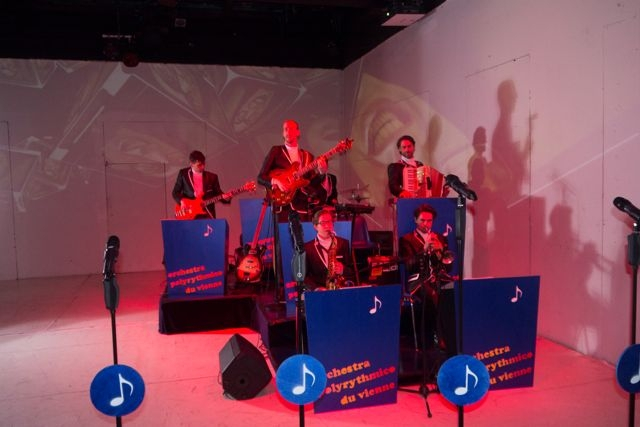 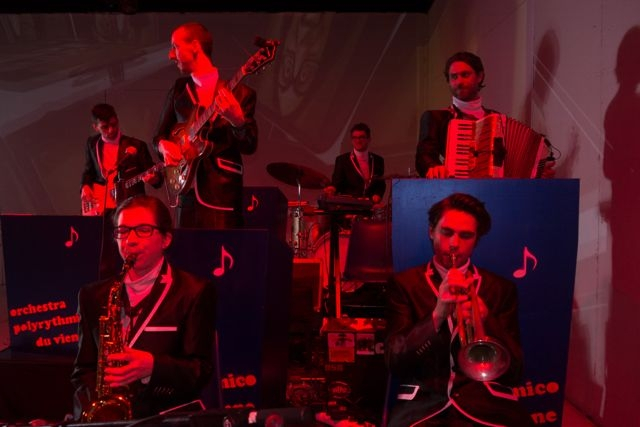 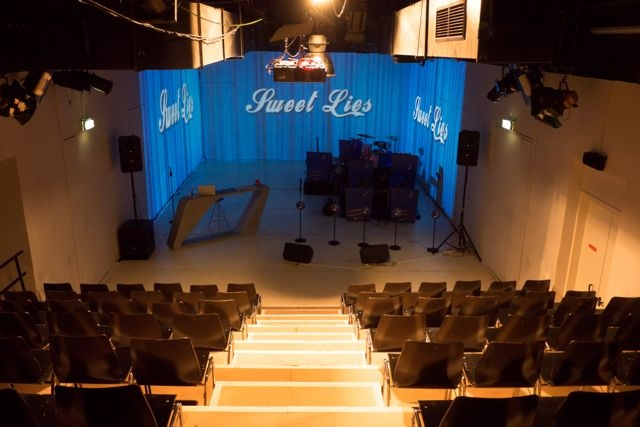 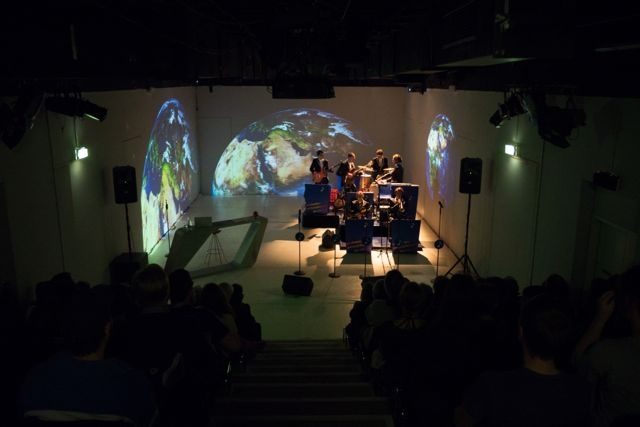 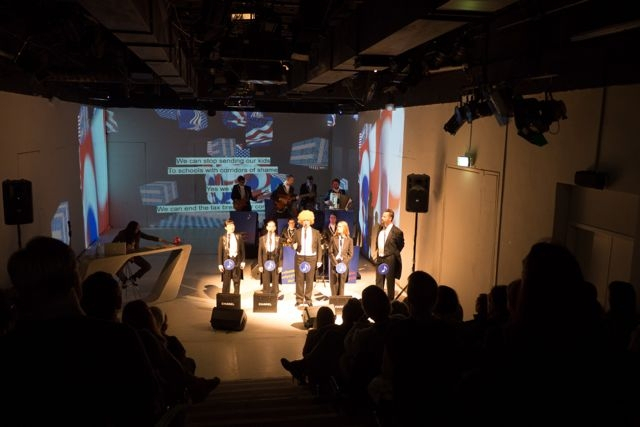 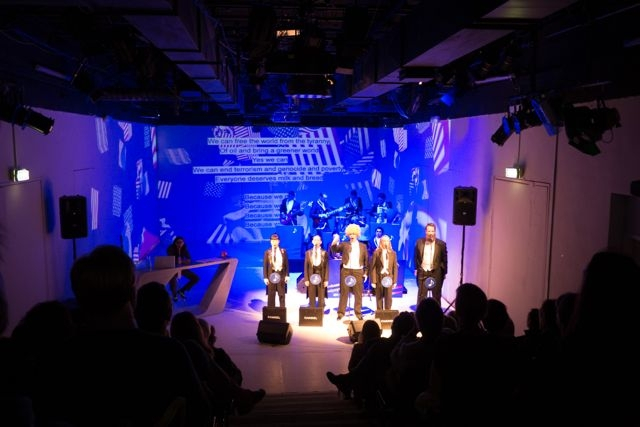 Sweet Lies is the last instalment in our ongoing Political Cycle. Look at it as a mashup of all the different topics we dealt with throughout the Political Cycle. Sweet Lies is a kind of Google/Wikipedia musical for our current political climate. It is the kind of “soup” one gets when trying to research the events of the last few years, only to find out a Babylon Tower of links, opinions, half-baked facts, and events that are on top of the list only because someone paid to have them there.

The traditional editorial practice divides news events into classical sections; world, business, sport, arts, etc. Most of the shows in the Political Cycle followed this practice. We took an in-depth look at various “Hot Issues” and applied a comprehensive research to topics in question. From terrorism and modern urban warfare (The Art of War), to the question, which economic system is suitable for our current crisis (Collapsonomics), to the discussions concerning climate change (The 100% Environmentally Friendly Show, Raumschiff Erde), to the more extensive process of how a unique historical event influences future generations (The Big Event).

The new web-based editorial practices have no coherent system. It is an all inclusive buffet, first come first serve. Events are connect randomly, in an arbitrary fashion. It is up to the person who search to make up the links, to establish a connection, or to give up the search altogether and start over. But sometimes by sheer “accident” unexpected connections occur, associative links materialise. Issues that belong to different sections, in the traditional news practice, come together to form a new way of looking at news events. The best way to describe this practice of editing is to think about free association, where topics are linked to each other by a common word, an image, a sound, an idea, a mistake, a search accident.

The text for Sweet Lies will be assembled using the free association method, by conducting a widespread search of the news events of the last few years. The final text is a collage, a mashup, of the various events that popped up during our research.

The point of departure is Barack Obama’s concession speech after losing the primary in New Hampshire to Senator Hillary Clinton. It is not just a political speech, it is also a great example of effective and inspiring rhetoric. The “Yes, We Can” speech sent a ray of hope to people all over the world. This feeling of HOPE and the subsequent disappointment that followed are the centre of Sweet Lies.

It is important to note that a lot of the text we are using in Sweet Lies comes from actual text used by politicians, entertainers, celebrities, blogs, news media outlets. We try, as much as possible, to let the events speak their own language.

From Obama’s speech the events, and the text, is unfolding in a circular, sometimes random, sometimes arbitrary fashion.

Two types of text will be used in Sweet Lies:

* The first is spoken by a fictional news caster/moderator. The moderator tells the story of our time as news. Connecting the different topics, giving the historical background, making sense of the free association links. In addition, since it is the end of the Political Cycle the moderator is giving her personal views on the events she describes; it is as if we share via the character of the moderator some of the findings we came across during the making of the Political Cycle.

* The second text  includes mainly song texts. This is the musical soup part of the show where the different events of the last few years come to life via song and dance in the style of a political review performance.