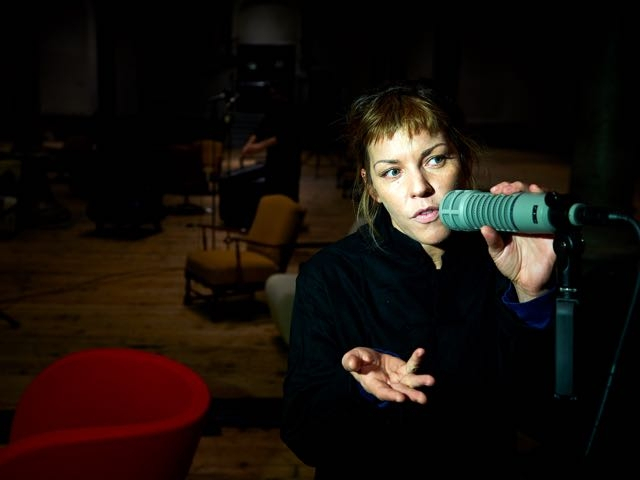 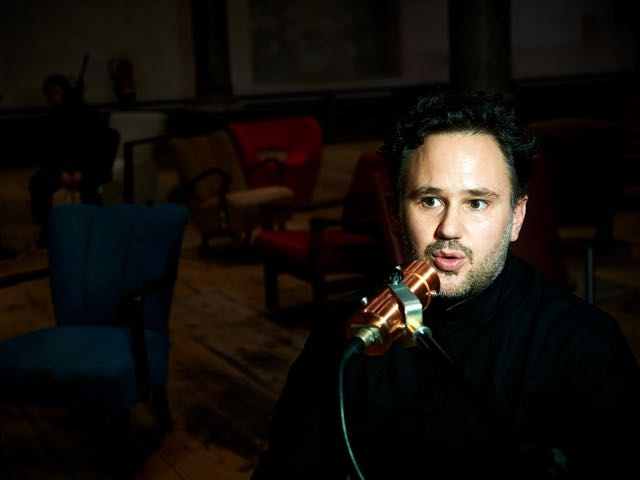 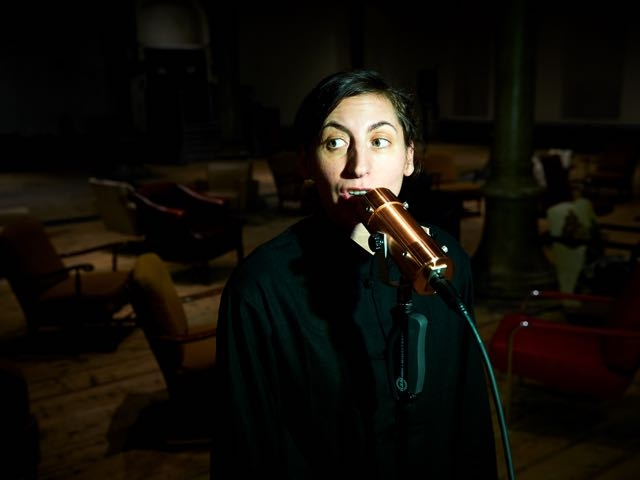 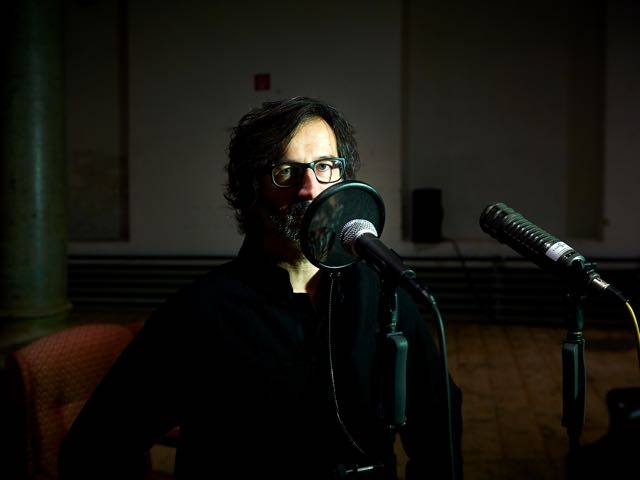 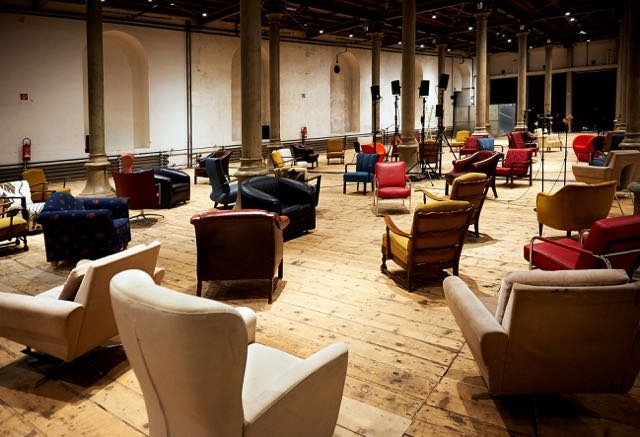 There’s a Rumble in the Jungle

Theatre is evil, Radio is good

Click here to listen to the live streaming, broadcast live by the ORF, 16.11.14 Rumble in the Jungle

“There’s too much nudity on TV, and not enough on the radio.”

Jarod Kintz, Seriously delirious, but not at all serious

The title: “Theatre is evil, Radio is good” is a ‘play’ on a title Richard Foreman gave to one of his plays. the original title was “Film is Evil: Radio is Good”. Foreman was concern with the effect of visual culture on our intellectual and spiritual life.

Film is evil. As the Bible says: Thou shalt not worship graven images. Of course, one cannot deny film and other visual aspects of experience, but our culture has become tremendously overbalanced toward the visual. The assault of images is so great, the bombardment so continuous, we’re unable to weave them successfully into the warp and woof of daily experience.

In that sense theatre is also evil. Like film, it is rather a more visual, than aural, experience. The stage pulls the audience into watching instead of listening.

The greatest efforts in Theatre is evil, Radio is good will go into making the listening experience as powerful as the watching experience. Even in a normal, narrative theatre, it’s difficult to be aware of the text as language without losing yourself in other elements of the production. The dialogue usually serves to make you see past the spoken language so that you watch the story it is telling-in a “prose like” way, the language disappears in favour of the story it is conveying. In Theatre is evil, Radio is good we would like to stage a text that would give the spectator/listener the sensory experience of listening, word by word, to what is being said. it should be an aural, rather than a visual, experience. The spectator should listen to what is happening in the language.

How do you direct the experience of theatre audience toward listening? Simple, you turn off the light.

“Radio affects most intimately, person-to-person, offering a world of unspoken communication between writer-speaker and the listener”. Marshall McLuhan

Radio, in essence, is a private experience. Despite the familiar old images of families gather around a table listening to radio, it is something we mostly do alone (while driving, cooking, shaving).

Theatre, on the other hand, is a communal experience; even if we sit alone in the dark.

The idea in Theatre is evil, Radio is good is to combine the intimacy of radio with the communal nature of theatre.

Turning off the light, in the whole space, turns the theatre from a visual experience to an aural one, it is an audio theatre.

What secret ingredient does audio theatre possess that makes it so seductive…? The answer lies not in a special ingredient, but in the lack of one. Audio is blind. Audio is the most intensely visual of media precisely because of its sightlessness.

What makes audio theatre really exciting is the all-round creativity of it. The writer creates the original, then the director creates the ambiance for the actors, and the brilliant technicians who manipulate the tapes, dials, sounds and music create the atmosphere. But the most creative of all participants are the listeners, the audience….The listener is set designer, costume designer, make-up man, and even the casting department. They ‘see’ the characters they hear, then put them into the drama quite literally, in make-up, into the set, the wardrobe, even the mood and atmosphere.

“I still think radio is probably the greatest entertainment medium ever invented. It made the audience work, and I think television audiences don’t have to work, that’s why they fall asleep half of the time. Vincent Price

The book ‘And There Was Light’ tells the story of Jacques Lusseyran, a Frenchman who, though blind, had played an important role in the Resistance during the Nazi occupation. He was leader of a Resistance unit, and whenever someone wanted to join the unit, Lusseyran would spend an hour alone with the applicant, chatting about innocent, unrelated subjects. Specifically because he was blind, his other sensibilities had developed to a degree that enabled him to tell whether or not the applicant could be trusted. During the war he passed on some forty people, and the only person he was unsure about turned out to be a traitor.

The story, real as it is, struck a cord of the Oedipus legend. Not being able to see turn one into a more insightful human being.

In one episode in the book Lusseyran writes about his childhood, about the first book his mother read to him after he became blind. The book was The Jungle Book by Kipling, and it was in Braille.

In Theatre is evil, Radio is good a character named Jacques Lusseyran tells his story. But instead of following the autobiographical details of his life, he becomes the blind motion picture director. This blind director is working on an adventure film. The adventure that take place inside his head. His own twisted imagining of the The Jungle Book which is as far away as it can be from the Disney version. It is Lusseyran’s audio film told as a mix between real facts the the imagined jungle inside his head.

Why the re-imagining of a tribal society?

The primary medium of human communication in the preliterate, tribal era was the spoken word and the human ear. The Gutenberg Age introduced the printed word and the human eye as the primary medium of human communication. Marshall McLuhan defined the spoken word as ‘acoustic space’. This is boundless, directionless, charged with emotion and horizonless. The written page bounded this space with margins, sharply defined letters and edges. The printed page removes the acoustic space for speech, but it then acquires a powerful visual bias.

The significance of the introduction of sound recording and transition technology is that it marked the onset of the detribalised electronic age. McLuhan argues in his The Medium is the Message(1967), that the apparently powerful extension of speech afforded by recording and transmission technology had the effect of reducing the sensory capacity of speech. He asserts that radio is not speech, but like writing, it creates the illusion of containing speech. What is clear is that mechanical and electronic sound communication depends on the single sense of the auditory canal and like writing stimulates a powerful visual perspective. McLuhan’s analysis supports the definition of the unique nature of audio/radio drama. It is auditory in the physical dimension but equally powerful as a visual force in the psychological dimension.

In Theatre is evil, Radio is good Lusseyran’s tribal society, the fictional Jungle Book tribe, is introduced to modern technology via an un-named colonial force. Essentially, the blind director tells the story of how we moved from spoken word as the main communication method to a visual one.

The audience enters a dark performance space. They are sited on chairs that are spread all over the room. The chairs are positioned in a way that there is not one clear viewing direction. The sound, live voices and recorded material, will surround the room from every direction possible. Each member of the public will have a slightly different acoustic experience.

The performers will speak via several microphones that will be positioned around the space. They will change places in the dark. The audience will be able to sense their movement in the dark.

The overall effect should be of a dark acoustic room where movement is hardly recognised. A room where listening, alone with others in the same room, is the main act of the staging. 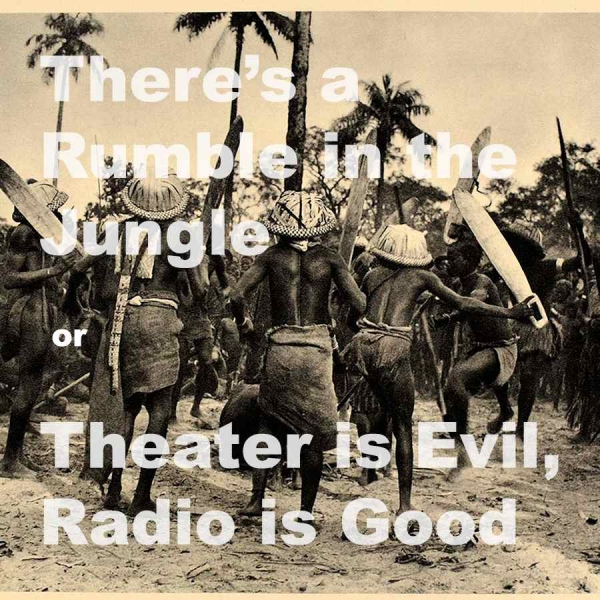 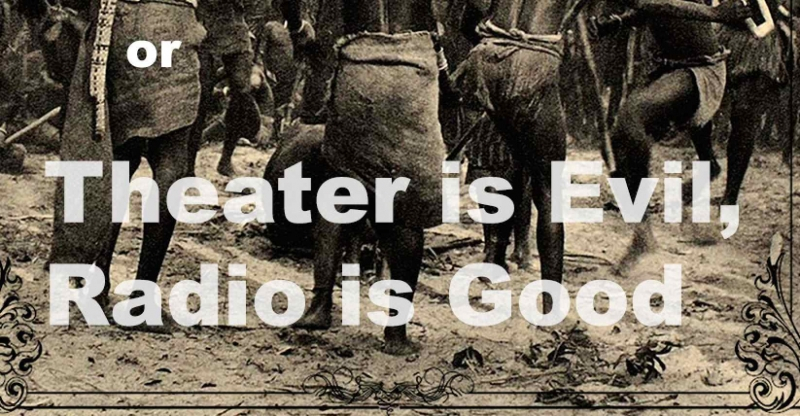 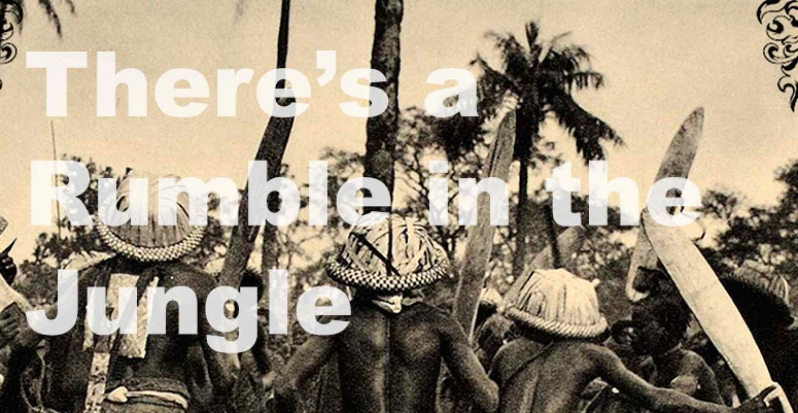 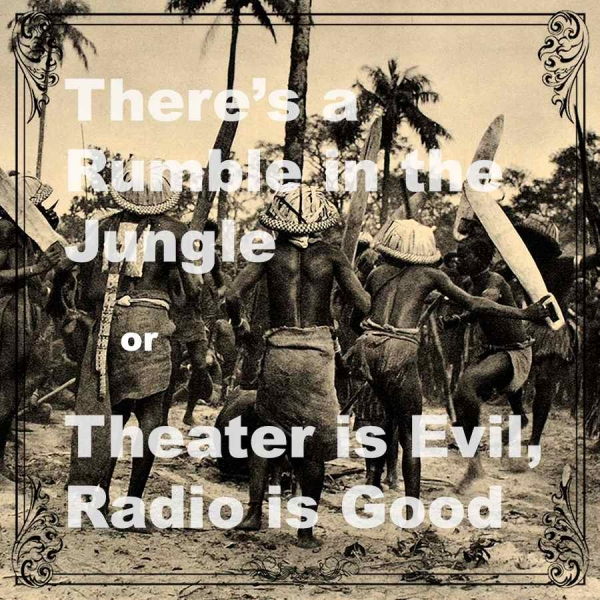